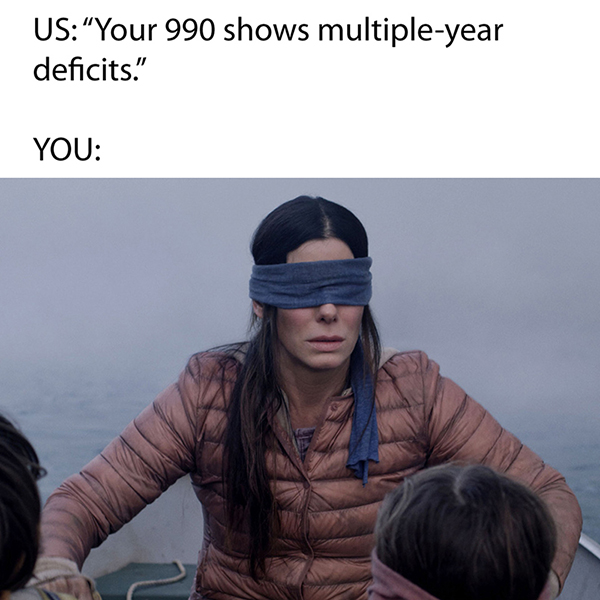 It’s tax season again; hooray! Much has been said recently about tax returns and what they may reveal about an organization and the people running them. Aren’t you glad you’re a non-profit and are thereby exempt from having to pay (and report) taxes?! Yes, of course you have to file a 990, but by design that’s public record. What could you possibly hide in plain sight?

Think of us, if you will, as your ex-lover. Your current online dating profile shows an image of you, taken at the perfect angle, in the most flattering light, your hair perfectly styled. Guess what? We’ve seen you roll out of bed in the morning. As for that claim that you “love salsa dancing”? We know the only salsa you enjoy is draped over loaded nachos (which you like a lot. Maybe a little too much—which those love handles, curiously absent in your profile pic, would suggest.)

How do we know all this? Turns out we’re really super at reading 990s. And that boring non-profit tax form that people glaze over or avoid like the plague? It’s actually a treasure trove of information—if you know where to look.

So, about that Louis Vuitton bag… Look, we get it: you want to look good! (It’s the same reason you chose that good angle and lighting for your profile pic and didn’t just snap a selfie of yourself first thing when you woke up.) Yes, image is important, but you know what’s not a good look? Spending beyond your means. True, that Cirque du Soliel act you hired to entertain at your last gala was impressive, but did it bring in significantly more money than it cost? If you’re spending too much on highly publicized or flashy events, or if you’re showing multiple-year deficits on your balance sheet, then it’s time to give up designer brands and Jimmy Choo[se] something more practical.

PRO-TIP: Of course, too much surplus isn’t good either. Yes, having a comfortable endowment is important; however, the role of the organization is to actually use a majority of the money they have on providing programs and services to the community pursuant to their mission.

The truth has a way of coming out. This age-old adage has stood the test of time for a reason: it’s, well, true. A one-night stand probably isn’t going to figure out that you really don’t like salsa dancing or stick to a keto diet (those damn delectable nachos!!) like your online profile suggests, but an S.O. certainly will. Similarly, if you’re cost-shifting and moving numbers around in your 990 to paint a different picture than actually exists—not sure the office lava lamp and Sharon’s office party birthday cake are program expenses…it may fool a one-time donor, but the savviest donors and foundations at best won’t be fooled and at worst won’t fund you because they’re left wondering what else you’re not being forthright about.

PRO-TIP: For many organizations, fundraising is the first casualty in cost-cutting. It’s a dangerous play though because the reality is you have to spend money (though not more than $0.20 on every dollar raised) to make money.

It’s clear from your online profile that you do, in fact, “enjoy both the destination and the journey.” There are selfies of you in lots of exotic locations, and the obligatory pic of you and your BFF clinking champagne glasses in first class. Part IX of your 990 indicates your love for travel, too. And we’re left wondering why you spent such a huge amount of your budget on travel. Was it totally necessary to go to that conference in Australia? How about holding your board retreat in Hawaii? And if you’re spending a huge amount on travel and other seemingly non-essentials while barely paying your employees a living wage, you better be prepared to answer some tough questions. Likewise, if you’re listing large amounts of unspecified “miscellaneous” expenses, expect to raise some eyebrows there, too.

PRO-TIP: Conferences, training and retreats are often legitimate professional development costs. Get out in front of perception and control the narrative in advance, offering solid data-driven reasoning for these expenses.

One thing your online dating profile doesn’t list is just how many people you’ve loved and lost in your life thus far. Your dating history isn’t public record, but let’s be honest, when we start to get serious with someone, learning about their past is an important part of deciding whether or not to build a future with them. And learning you have two failed marriages, a called-off engagement and a restraining order that you swear was “really just a misunderstanding,” gives us…pause. So, when your 990 shows you recently fired your ED, you’ve experienced a host of staff attrition, and you had a board member mass exodus of biblical proportions, you can bet that any interested donors are putting this relationship on ice, stat.

PRO-TIP: We also look closely at who is on your board. The quality of a board often reflects the quality of an organization. How many board members are there? Too many? Not enough? Who are these people? High profile? Family members? How diverse is your board? *Are members getting paid? (*see #5)

Who is getting paid and how much

You’re lying to yourself if you don’t think that one of the number one thing that people look for on your online dating profile is evidence of your financial prowess. Yes, you can lie about your numbers, but if stated truthfully, the numbers don’t lie. A person’s salary may tell potential partners important information about their financial stability, level of education, and how they are valued as an employee. Perhaps this is why Executive pay is one of the first things people look at when reviewing a 990.

Is your executive compensated appropriately? Too high, and you may lose funding for not being better stewards of your donations. Too low and people will wonder why you’re not paying market value for your top dog. Are they not doing a good job? Does the board not value them? Similarly, we look at your hierarchy of pay. If your CEO is making 50% more than her next highest paid director, we’re going to have questions about that. Lastly, we are going to notice if your 990 shows that any members of your board are being paid. This is an unusual practice, and for good reason.

While not illegal—the official rule is that only 49% of board members can be paid—compensating your board members is not only going to raise eyebrows, it will prevent you from getting grants. The IRS calls it the 51% test. Meaning 51% must be "disinterested parties," which includes those that have a relationship with another board member (ie. family) and other financial benefits (ie. being paid as a consultant). Organizations that don't past this test could lose their tax exempt status.

Non-profit board membership is a volunteer position. In a world where money is being raised for the express purpose of doing good in the community , using any of that money to pay people who are in a predominantly volunteer capacity is going to arouse suspicion.

PRO-TIP: While there are exceptions to every rule, we advise avoiding paying board members at all costs.

We’d like to be able to tell you that your dirty secrets are safe with us, but as we pointed out, your 990 informs on you in similar way that a for-profit company’s taxes might. But take comfort, because unlike taxes, which are due around the corner, your 990 doesn’t get submitted until May! This gives you a little time to think about what you’re reporting and what it might say about you to potential donors and employees who you can bet, will be looking.

Think you have what it takes to plan a great fundraiser without blowing a budget? Check out our job portal for a list of all our current searches to find the right job for your skill sets!

Stop taking selfies and let us take your picture. An Envision assessment gives you a clear picture of where you are now, and makes recommendations for how to get where you want to be. Contact an expert today for a no-cost consultation.

Because we know that together, we make doing good, better.